Our
reps
About us
Our Team
Our History
Environmental Focus
Share

The modular water chiller was invented by Multistack. It started with a radically simple idea: water chillers made up of modules that could be brought into the equipment room one at a time, through standard doorways and down elevators, to form a fully integrated water chiller system. The modular chiller idea launched a revolution and transformed Multistack into a leader in the commercial water-chiller industry.

Multistack sets the standard in the industry for superior customer service, fast and on-time shipment, superior product quality, and new product development. Our pioneering leadership in environmental issues is well documented. If you want the best, be sure to specify the original: Multistack. 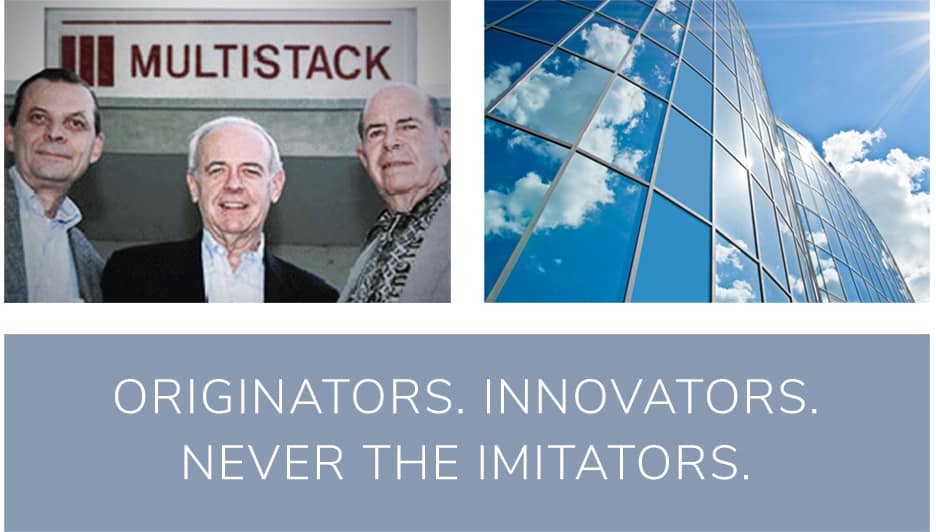 Multistack was founded in 1989 by Bill Bast, Dick Campbell, and Monte Holman, three highly respected, visionary HVAC industry executives, who partnered to take over the North American sales, marketing, engineering, and product support of an Australian-invented modular water chiller. They redesigned the product for the North American market, established a manufacturing process in West Salem, Wisconsin, and set up a continent-wide distribution network. In so doing, they sparked what would become a revolution in the commercial water chiller industry.

Multistack’s game-changing technology took root in the 1990s, with annual sales consistently topping 15% per annum. CEO Charles Kenyon joined the company in 1996. In conjunction with a small group of private investors, he led a management buyout of Multistack in June 2002. This transaction ensured the company’s ongoing independence and continued focus on its primary market of modular water chillers.

In April 2006, Multistack moved into a new state-of-the-art 70,000 square feet facility in Sparta, Wisconsin, to combine development, testing, manufacturing, and administration under one roof. Major office and plant expansions followed in 2007 and 2008, the latter doubling the company’s manufacturing capacity.

In 2009, Multistack became the first modular chiller manufacturer to be AHRI certified. We are proud to currently lead the industry with the most AHRI certified modular products. A further 35,000 square feet of production space was added to the main plant in 2010 and a 24,000 square feet satellite building was purchased to house coil manufacturing equipment. The most recent expansion in early 2017 made it possible to develop a new training facility and earmark more space for energy recovery ventilators, dedicated outdoor air systems, and air handlers.

Today, we continue to distinguish ourselves in the water chiller market by embracing a commitment to the flexibility of design, ensuring on-time delivery of all of our products, and always putting our customers first. CBS, Ford, GE, Gillette, GM, Paramount Studios, and PPG are only some of the prominent multinationals that rely on Multistack.

The diversity of our applications is virtually limitless: whether it’s for manufacturing toothbrushes, cooling a major automotive crash test facility, or delivering critical solutions for the US Department of State’s overseas operations, Multistack has the experience, the expertise, and the equipment to get the job done – and get the job done right.